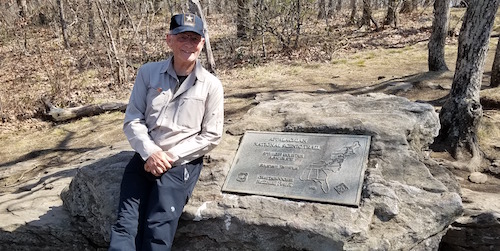 Tom Young – who lives in Sweetbriar and is 75 years young – recently completed hiking the entire Appalachian Trail in a little over 5 months. He started his trek on Springer Mountain, Georgia, March 22, 2017, and finished on September 2, 2017, on Mount Katahdin, Maine. That’s 2,190 miles through 14 states, walking 10 hours a day, every day. During his AT hike, he lost 35 lbs., fell about 50 times, suffered a black eye, shin splints, was hit by lightning, went through 3 pair hiking boots, and met many wonderful hikers and supporters for an adventure of a lifetime.

The Appalachian Trail is the longest hiking-only footpath in the world. It is maintained by trail clubs and multiple partnerships, and managed by the National Park Service, United States Forest Service and the nonprofit Appalachian Trail Conservancy. The majority of the trail is in forest or wild lands, crossing 275 named mountains. It is extremely strenuous and dangerous in many places. Only about 30% of those who begin as Thru-Hikers (those who attempt to hike the trail in its entirety in a single season) complete the entire AT.

So why did a 75-year-old resident of Barefoot decide to make this trek his goal? As a 31-year military veteran, he was reminded of the old recruiting message, “Be all that you can be.” Once he began training and gathering equipment during the year before he left, he couldn’t help but focus on trying to go all the way.

It was all about keeping the load light. A lightweight backpack, a tent that weighed 2 lbs.; his kitchenware consisted of a PocketRocket backpacking stove kit with burner and propane canister to heat a 2-cup pot. He carried dehydrated food and noodles, one pair underwear, one set hiking clothes, lightweight synthetic winter gear, and two 2-liter bottles of water (very essential). He never exceeded 30 lbs weight in his pack, usually carrying 2 days food.

Tom says the only way to really appreciate the beauty of nature on the AT was to stop. You could not hike and look around; you needed to keep your eyes on the trail. Going down the mountains was sometimes more difficult than going up.

The trail offered some welcome navigation bonuses. Every 50-100 meters, a white blaze (painted mark on tree or post) indicates you are on the AT. There are 85,000 white blazes on the AT. But you can still get lost easily, as some parts of the Trail are maintained better than others. Your map and gps are invaluable – as are fellow hikers (mostly women – ha!) who would shout to help you get back on the trail.

Trail Lean-to’s: Every 12-15 miles over this vast trail, hikers could find temporary shelter under lean-to shelters built by trail clubs to help you get out of rain.

Trail Angels with Trail Magic: At many intersections of the AT, you encountered food and drink stands. Trail Magic is the delicious free food and drinks provided by locals (trail angels). Tom remembers with great appreciation the Omelet Guy who made a gigantic 5 lb omelet for him.

The AT was very strenuous. Tom refers to the trip conditions as “the 4Rs – Rocks, Roots, Rain, and Rhododendron”. Climbing up boulders offered many opportunities for tripping. The trail was worn and included many mountaintops; roots were gnarly. You needed to watch every step of the way. His black eye was the result of his trekking poles getting caught behind him on roots, so he fell on a rock resulting in a deep cut above his eye. Rain added difficulty to the already strenuous terrain; rhododendrons are plentiful in the mountains.

Another unforgettable memory was getting hit by lightning on Mt Bushnell in Maine. It had been thundering all day with no rain. He arrived at the top of the mountain on a bedrock path. Suddenly a bolt shot up out of the rock, hit his left foot, and threw him 7 ft onto the ground. He was stunned for several minutes, unable to move. The ER doctor he visited later that day said the bolt traveled through 4 resisters – his 2 rubber-soled shoes and 2 trek poles with rubber feet. Miraculously he was not injured.

Bears, moose, and snakes were also potential dangers. And there were lots of mice, often running across your face. Trails were dangerous in many places, especially in New Hampshire and Maine on high mountains way above the tree lines. In the Smokies, there were lots of bears – and convenient bear cables for food bags with pulleys already installed along the trail. Most of the time Tom had to rely on his own devices to protect his food and tent by hanging his food bag 20 feet up in a tree.

Water from streams and springs provided drinking water. Tom always kept one water bottle for gathering water and then filtered it into a clean bottle. He never was sick during this entire adventure.

When Tom started his journey in Georgia, he registered as Hiker Number 1046 for 2017; when he reached Harper’s Ferry (halfway point), he logged in as Number 746. At the completion of his journey in Maine, he was registered as Number 582. He was one of the few who completed the entire trail in one season. He believes he is the

second oldest guy to complete the AT this year, beat by an 81-year-old, also former military man.

So when asked if he is glad he accomplished this, he says yes. Would you do this again? His answer without hesitation: No. But he would love to show his grandkids some parts of the Trail. His wife, Jane, is glad to have him home again. "I'm elated, relieved, and extremely happy it's over," she says.

He shaved his beard last week and is enjoying his family in far less rigorous settings these days.